Here is the link to David Harvey's online lectures on Capital.
I recommend watching Class 1 (introduction) and Class 2 (Chapters 1-2). the lectures are long but (I think) pleasant to watch (especially on a stormy weekend ;)

On Billionaires and Political Spending in the US 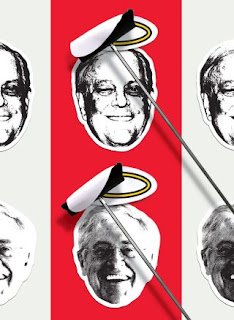 http://www.newyorker.com/magazine/2016/01/25/new-koch?intcid=popular
A new, data-filled study by the Harvard scholars Theda Skocpol and Alexander Hertel-Fernandez reports that the Kochs have established centralized command of a “nationally-federated, full-service, ideologically focused” machine that “operates on the scale of a national U.S. political party.” The Koch network, they conclude, acts like a “force field,” pulling Republican candidates and office-holders further to the right. Last week, the Times reported that funds from the Koch network are fuelling both ongoing rebellions against government control of Western land and the legal challenge to labor unions that is before the Supreme Court.
Posted by Smoki Musaraj at 10:10:00 AM No comments:

Talking of capitalism, China economic growth is the slowest in 25 years according to BBC.  As it is obvious, China's growth seen as a driver of the global economy. However, the slow growth turns out to be a major concern for investors around the world. I like this metaphor about China and and its impact on the global economy used in this article:" It has become a financial markets cliche- when China sneezes, the rest of the world catches a cold". It explains it all. http://www.bbc.com/news/business-35349576
Posted by Zulfia Zaher at 8:11:00 PM 1 comment:


The world's 62 richest billionaires have as much wealth as the bottom half of the world's population, according to a new report from Oxfam International. I think it is an interesting read as we talk about money this time in class. I would like to know if you are okay with this?

Growing up in a country where the economic market entirely relied on imported goods, I was thought in school, through peers and family members that capitalism contributes into rich being richer and poor being poorer. It is nothing but a contiguous disease that sucks the working class’ blood. However, when I started journalism and media school my focus has shifted from who controls the means of production in economic market to who controls the means of information in media. Media scholar Ben Bagdikian reported in 1997 that only 10 big media conglomerate control the lion share of media industry in the United States. Later in 2004, columnist William Safire finds that five big media corporations dominate the US media industry. The concentration of media ownership constantly poses a challenge to democracy. Furthermore, the 5 big media corporations dominate the global circulation of media content. As a media student, I was always concerned about the means of media production and raised questions related to the concentration of media ownership. For example, how media ownership concentration effects the informed decision making of citizens? And, does media globalization strengthen the process of cultural homogenization, etc? Along the way, I found out that media plays a significant role in creating capitalistic dialogue, commercialization, cultural homogenization, etc.

With the proliferation of social media, people have started thinking that the audience became the content generators. They thought that audience was not the passive receivers anymore because they create content, engage, interact, and share it with others. However, the question again is who owns the content? And, if we are accessing the social media platforms for free what cost actually we are paying for that. The reality is that our privacy is jeopardized and we are under consistent surveillance for these big corporates who then target us to buy their goods. This is what Hart call is the virtual capitalism. These corporations no longer have to spend money on traditional marketing. They can collect this data through our online activities; thus, they are able to target us individually. However, by virtual capitalism Hart means e-commerce. He posits that online access creates a technological gap and separate societies by controlling their access to money and ruling the e-commerce at the global level.

Hart takes a holistic approach contributing Marx and Weber’s arguments to analyze the role of money in the society. He explains how money is a problem and the solution at the same time. He talks about the money in the context of past, present and future and how it impacts the division of power, politics and our socioeconomic status in the societal level. The upcoming election in the United States is a great example of future investment. Who would be able to invest money on the candidates’ campaign? The answer would be obvious that those corporates and businessmen who have political interest and they would be the one who would have more say in decision making in future if that candidate wins the election. They have the money so they do not only control the market or the means of production but also they are politically powerful. Even if they are not directly involved in politics, their money is.

Hart illuminates that an “institution that depends on the freedom to spend money can hardly be said to be democratic, when some people have so much more of it than others.” (p. 73). He further states that these money holders, capitalists, dominates the entire economic market in the forms of big corporates that overtake the small businesses and private individuals and at the same time makes it difficult for anyone to compete and resist before them. The small businesses either have to let them takeover or diminish overtime with the huge amount of loss. This is indeed a profound example of inequality and unfreedom of economic market in today’s world. It was just yesterday that I read an article on CNN about The world's 62 richest billionaires who have as much wealth as the bottom half of the world's population. I was amazed to know how they managed and maintained all this wealth? What form of capitalism they applied? It cannot be simply the personal face of capitalism, entrepreneurship, business and trade, because we are talking about billions here. We are talking about a grand form of capitalism. This report itself is an example of “Money in an Unequal World.”

Comments on "Money in an Unequal World" (Hart)

The concept of capitalism in general is something that exists only in controversy with heavy historical contexts. I think that many people of my own generation take this establishment of capitalism for granted as we have grown up and watched the wave of globalized instant communication grab control of the international economy, or perhaps vise-versa. As this article points out, the expansion of markets is ideologically connected with the establishment of “more democratic and inclusive societies.”

After the Cold War, western capitalism shifted; the modern technological shift in communication further geared this transition. The modernization of a global economy has likely also affected global politics. “Virtual capitalism” arose, removing economic endeavors from their territorial ties; as the article puts it- no longer was it just about Italian capitalism or Japanese capitalism. Everyone from the First World to the Third World has witnessed gaps between the rich and the poor create a situation of “global inequality.” The article touches on the influence of the industrial revolution and its’ correspondence to capitalism begging the question “did the industrial revolution rest on loot from the Third World or not?” The article discusses how money removed societies from a “state of nature” looking at rural civilizations and their capitalist rise. While I think this is a valid description of the transition I think it leaves out the aspect of why or how money overcame nature from a social development standpoint.

Marx brings the point that markets are an exchange on money, with a capitalist focus on increasing profits, rather than simple or more “natural” exchanges of equivalent goods. This marks a huge cultural shift for many communities from relying on the goods of trade with neighbors into a large and complex system of international relations. This is in a way a set economic structure encouraging, or nearly enforcing exploitation, measuring out each individual good and it’s worth, including plants and animals, as well as labor. Categorizing items in this way led to deeper enforcement of a class system as well as the development of “class alliance” as neighbors of equal wealth feel the need to support families facing similar economic positions.
Posted by Unknown at 11:17:00 AM No comments:


The firm said it will pay a civil monetary penalty of $2.385 billion, a cash payment of $875 million and $1.8 billion in consumer relief:

"The consumer relief will be in the form of principal forgiveness for underwater homeowners and distressed borrowers; financing for construction, rehabilitation and preservation of affordable housing; and support for debt restructuring, foreclosure prevention and housing quality improvement programs, as well as land banks."